Agra is a major tourist destination owing to the UNESCO World Heritage sites and the main one being the Taj Mahal. The tourists flock into the city throughout the year to experience the reflection of the Mughal era, it is never a bad time to visit Agra and witness the authenticity. However, visiting during the cooler months of October to March is pleasurable and better. Agra experiences extreme temperatures in summers and winters, the best time recommended visiting is in the months with moderate climate. 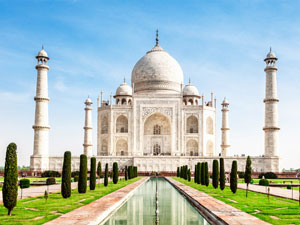 You cannot think of Agra without thinking of Taj Mahal. Or, you might not have thought of Agra were it not for the monument of love. Taj Mahal, the white marble beauty was constructed by Shah Jahan in memory of his beloved wife, Mumtaz Mahal. The monument stands proof for the brilliance of Mughal architecture. Named as one of the wonders of the world, Taj Mahal stands the test of time. It has been declared as World Heritage Site in the year 1983. It is a feast to your eyes and senses to watch the unmatched beauty on the night of full moon day.

You would regret if you miss Agra Fort during your visit to Agra. The 16th century monument is yet another proof of the architectural brilliance of Mughals. This is situated near the gardens of the world famous Taj Mahal. Called the Red Fort of Agra, you will be awe inspired by the powerful fortress. The fortress comprises many palaces namely, Jahangir Palace, Khas Mahal and so on. There are audience halls and two mosques. The entire fortress is a symbol of Mughal’s grandeur. It was in Agra Fort Shah Jahan was held prisoner by Aurangazeb, his son. Shah Jahan, the emperor, spent his last days here viewing the monument of love he had built for his wife. 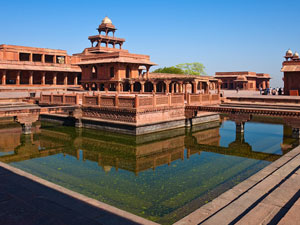 Built by Akbar, the Mughal emperor in 1570, the city was a tribute to Sufi Saint. Fatehpur Sikri is a perfect blend of Indian, Islamic and Persian architecture and it was built using red sandstone. For around 10 years, the city remained the capital of Mughal Empire. The city has a 6-kilometer long wall on three sides and there are towers and gates. It houses some of the city’s important buildings namely Buland Darwaza, Birbal’s House, Panch Mahal and Jama Masjid. The entire city along with all the important constructions including royal palaces, Jama Masjid and courts were declared as World Heritage Site in the year 1986.

India’s first tomb to be made completely out of marble, Itmad-Ud-Daulah signals the beginning of new era in Mughal architecture. Until then, it was buildings of red sandstone. It was constructed during Jahangir’s period. The 21-meter high tomb was constructed in memory of Mirza Ghiyas, who was the father-in-law of Jahangir. He was bestowed with the title Itmad-Ud-Daula, which means pillar of the state. Influenced by Islamic architectural style, the monument’s towers display Persian touch. The wall paintings inside are sheer beauty to view.

Visiting Wildlife SOS could be said to be the duty of humankind to help balancing the world and make it a better place for all creatures. Wildlife SOS is a voluntary organization that works for the welfare of animals in India. The place is a revelation that lets you aware of the various projects of the organization to preserve wild life. This will definitely be an inspiring experience.

Life has a lot in store for every one. Unfortunately, the deprived are left to fend for themselves. We could plan our pleasure trips in such a way that it helps us gain knowledge on subjects we never had the time to know about and make our trips useful while elevating ourselves to a higher plane.

By Air – While Agra does have an airport, making it an only 30 minutes flight from Delhi, currently there are no flights operating to Agra.

By Train - Agra has excellent train services from New Delhi. Shatabdi Express, Taj Express and Inter-city Express from Delhi take 2-3 hours to reach Agra and are good options. Agra is also connected to other major tourist destinations by train.

By Road - Many National Highways connect Agra to all major Indian cities and express and air-conditioned bus services are available to and from Delhi, Jaipur, Lucknow, Gwalior and Jhansi.